There are errors, please correct and try again...
No results found matching your search criteria. Showing all properties instead. 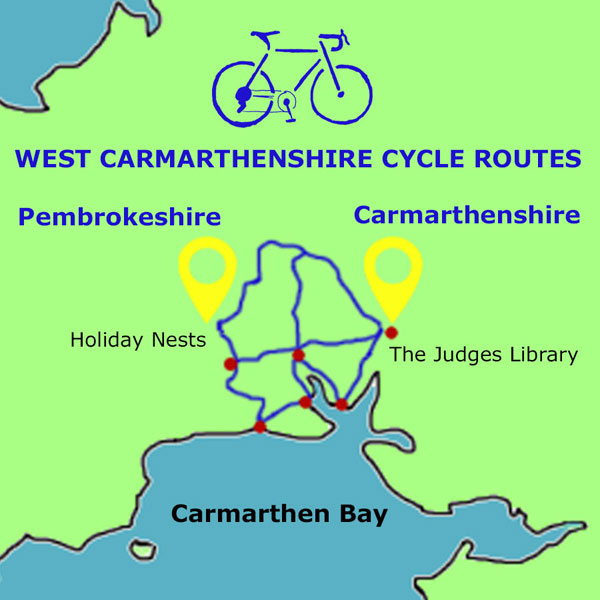 Starting from Holidaynests there is a steep climb up the hill to join the route. Click this link for Directions: http://www.discovercarmarthenshire.com/explore/road-cycling/west-carmarthenshire-routes/

A diverse cycle route around the western area of Carmarthenshire combining coast and countryside with quiet roads and great scenery.

On the Northen Section; with good weather the Preseli hills are visible at times, and as the elevation increases there are often nice views of the coastline, as far as the Gower. It is 250m elevation at the highest point.

The Southern Section is mostly coastal, and the Towns to be highlighted are here:

Llanstephan, with a beach at the mouth of the estuary and an impressive Castle at the top of the hill, where the River Taf and the River Towy enter the Sea. There is good fish and chips to be had at the beach Car Park and a couple of pubs in the village.

Laugharne, known as the final home of Dylan Thomas, where his boathouse (which is now a museum), and his Writing Shed (where much of his famous writing was done), are now a must see on a trip to this part of Wales. Laugharne is also the site of a beautiful Castle in a commanding position over looking the Taf Estuary.

Pendine, is the town with speed at its heart, where the 7 mile long hard sandy beach made it the location for many speed record attempts and the Museum of Speed demonstartes is impressive History.

The hit BBC Drama 'Keeping Faith' was mostly filmed at the places along this Southern part of the Route.

Overall it is a route of surprises, it will challenge and will demonstrate just why Carmarthenshire is know as 'The Cycling Hub of Wales', and 'The Garden County of Wales'; with rolling hillsides, fantastic views and long stretches of Coastline, and more than a few hidden gems and less known features along the way.

Loading...
Upps!
You're running a web browser we don't fully support. Please upgrade it for a better experience.
Our site works best with Google Chrome.
How to upgrade the browser